At 1200pm Singapore time, March 27 2014, Xiaomi started a new round sell of its Redmi Phone. According to its statement, 5000 sets were sold out in 4 min 42 sec. Very soon after paying via PayPal, happy customers found xiaomi is still waiting for payment on their website. 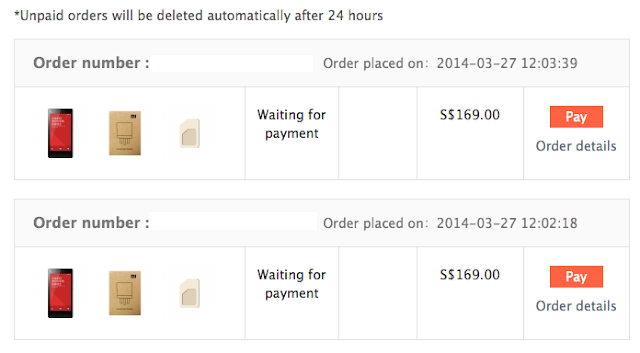 Some people love Redmi so much that they made multiple payments in afraid of losing it, some Mi fans saied they made 4 times payments on Xiaomi Singapore’s Facebook page.
Xiaomi stated that there were issues with Paypal, who was not able to pass back right information to confirm the payments. Xiaomi created the hash tag #PayPal27Mar, indicating PayPal is liable. However, it seems Xiaomis is the only affected company. No user complained on PayPal’s fan page.
The issue is unsolved after 22 hours.

PayPal credited 75 SGD to my account as a token of appreciation.